“Good morning, John.” President Trump reached across his desk and greeted his chief of staff with a prolonged double handshake. I woke this morning with a great idea, one that’s never been done before, not by any other president in the history of this country.

“I want to introduce a new American flag, one that reflects the new America, the one I’ve made great again. What do you think?”

Kelly wiped his hand across his mouth.  “Well, sir, it’s an interesting idea, but there are some pressing matters on the table. There’s the potential pre-election government shut down, the fallout from the Woodward book and the anonymous New York Times oped.

“Never mind those things. They’ll pass over as everything does. My people love me. Just look at my ratings,” he said passing an article across his desk.

“Sir, these are rantings, not ratings. They list the lies of the week.”

“What lies? You mean fake news mis-quotes? Oh, who cares, my people are with me. Now, here’s my idea. You get me the best flag maker you can find, but make sure they’re American. I can’t have some Chinese coolie worker or one of those people from shit hole countries sewing our flag.

The president rose from his chair scowling at Kelly. “You’re wasting time. Let’s get on with this. I’ll have Sarah slip at today’s news briefing that a surprise will be coming from the White House later this week. It’ll get everyone excited and media mayhem will distract the world from these other issues.

Kelly cleared his throat and twisted his jaw while straightening his tie. “Sir, there are some important matters that we must address. There’s the trade agreements, North Korea, the Mueller indictments…”

“Not to worry, I’ve told you. This will be a distraction and give time for things to settle. Have you seen the fake news media’s already scrambling for a leak of my greatest idea? Oh, I just love this.” He grinned rubbing his hands together.

When Ivanka arrived dressed in a fitted white sheath dress and matching heels, Trump stared, nodding with admiration at his prodigy. “Please sit, darling,” he said taking his place behind the mahogany desk, where he shared his latest idea.

“Hmm, a new American flag?” she whispered. He watched, waited until their grins met.  “Of course, Daddy. That’s a great idea. After all you have made America great again. We should celebrate it with a new flag.”

“Exactly. Wonderful. I knew you’d like my idea. And we’ll have a parade, the grandest parade ever. Every military unit will march carrying the flag and every uniform will have the new flag emblazoned on its shoulder, the right shoulder. It will be a massive celebration. I can see it now. All those flags waving, welcoming a new era in America.

Three days later, Ivanka walked up to the White House gates, a brown cardboard tube tucked under her arm with the just enough of the MAGA flag label visible for photographers to capture. And just as planned the media zoomed in and the flurry of speculation began. The rumors naming Trump’s Deep Throat, the NAFTA debacle and the threat of government shut down were old news.

“Yes, this is wonderful. The best.Amazing!” He breathed heavily, washing down a bite of his Big Mac with a sip of Coke while staring at Ivanka’s drawings. He buzzed General Kelly and instructed him to call an immediate cabinet meeting.

Trump paused, but for only a second. “Yes, this is an emergency meeting, and make sure there’s a mole in the room. I want this leaked. Trump laughed hanging up his phone. “Power, it’s a beautiful thing.”

In the days that followed, White House officials could not contain the President’s urge to tweet: Mueller investigation done. Can’t prove collusion! WITCH HUNT!!! A massive failure! Waste of time and money. Your President has done more for this country than any other president before him. AMERICA IS GREAT AGAIN!!!  And while the country went wild with cheers and protests, the president gloated.

On unfurling day, Trump supporters arrived early filling the bleachers lining Pennsylvania Avenue chanting USA,USA, while protesters shouted Lock him up. fifty flag bearers led the parade down Pennsylvania Avenue followed by the Marine Corps Band alternately playing “Hail to the Chief” and songs paying homage to America. President Trump followed with Ivanka on one arm and Melania on the other. Mamie Jefferson  and her extended family followed right behind. And in the wind flags lining the streets waved the face of Donald Trump centered on a red trimmed field of golden circled by the words America is Great Again.

Too Much Weight to Carry – Published in Flora Fiction Review – March 22, 2022 Wearing twenty unwanted pounds and bearing the […] 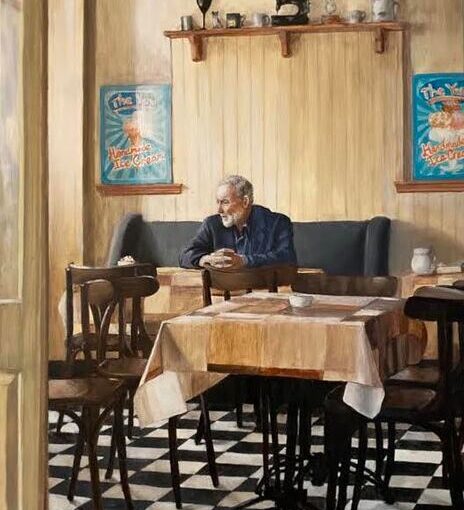