Today after two chimes of the doorbell, I watched through the front door glass panel as Jake raced down the stairs and slid across the polished wood floor to let me in. Probably finishing that cleaning he was to have completed before my arrival today. But glad he didn’t want to disappoint me, I kept my thoughts to myself and mirrored back his smile.

We settled ourselves back at the kitchen table where the same old papers remained and a few more had been added to the neglected stack. Jake answered my routine questions with the usual fine, good, yeah. Basketball game tonight, homework was already done and his new homework folder was working well.

Familiar with the old adage, When something sounds too good to be true, it probably is, my invisible antenna raised. “So let’s have a look.”

A few tattered papers peeked out the top of the green folder Jake pulled from his binder. Stuffed in the To Do side was a large packet with the details for a new long term science project. The Finished side held three math worksheets, one finished, two untouched. I chose to start with the science project, which Jake claimed to have received without any instructions. “The teacher just gave it out and said she’d explain it later, but there was a fire drill and when we got back to the class, we had to go to lunch.”

Hmm, really. For warned of Jake’s challenge with forthrightness, I thought we might be playing Truth or Lie, but if so, I credited his creativity and put my doubts aside.

Knowing long term projects with pages of instructions can be overwhelming to students, I wanted to ameliorate any angst by scanning the packet, looking for key elements and breaking it down into small doable sections with intermediary self-imposed due dates – thus introducing the second element necessary for success – Time Management. While Jake found this to be most unnecessary, his resistance was no match against my insistence.

The directions read, each student was to pick a scientist from a list provided, research their biography and at least one major accomplishment. They were to share the results of their research with the class through a PowerPoint or personal interview with the scientist. Presentations were to begin in three weeks.

We ran down the list of scientist’s names and Jake marked his first, second and third choices in preparation for class the next day. Then we moved over to the month-at-a-glance calendar and marked the project due date. We agreed to divide the time for research in two parts, biography and accomplishment – leaving one week for each phase. We added those dates to the calendar. This left Jake one more week to work on the presentation, which he had already decided would be a PowerPoint. He was quite confident the plan left him “more than enough time” to complete the project, while managing daily homework, test preparation and basketball commitment. I had some reservations, but hoped with all my heart he could do it.

Back to the table and the two math worksheets. Truly a master of creative excuses, I stopped Jake 30 seconds into the continuing fire drill saga and suggested he get out a pencil and see how much he could complete before my timer rang in 20 minutes.

I was impressed by his ability to stay focused and let him work an additional 10 minutes to complete both worksheets.

“Good job,” I rewarded him as he returned the finished papers to the folder. “Now there are those boxes upstairs awaiting our attention, right?”

“Right!” Jake raced ahead and took the steps two at a time. Proudly swinging open the unobstructed door, he shouted, “Tada!”

Wow, I was truly amazed. The stench of rotting food and sweat infused athletic clothes remained, but the bed was covered now only by a rumpled blanket and a pile of colorful pillows. For the first time, I could see the entire floor. “So your carpet is blue.”

Apparently not yet reading my response, Jake studied my face before joining me in laughter. “Great job! Stage one complete.” I suggested we move on to step two and asked if he could guess what that was. Knowing Jake’s penchant for being right, I suggested he use his nose before answering.

He inhaled deeply and shook his head with uncertainty. As though he’d lost his sense of smell, he looked at me with raised brows and answered with a question. “The trash?”

I helped him lug the box down the stairs and out to the garage trashcans. Back upstairs I opened a window to exchange the lingering odor with some fresh air before we stripped the greying sheets from the bed and took them to the laundry room. Although clearly pleased with the progress, my next suggestion that we remake the bed was met with wide eyes and vehement shaking of his head. “Come on,” he raised his voice, “that’s the maid’s job.”

“Not today,” I said leaving the room in search of the linen closet. I returned with a fresh set of sheets and a stack of neatly folded colorful pillowcases. “Sniff,” I said putting them under his nose. He did, but only the look on his face spoke his discontent. He stood in the corner of the room and watched as I shook out the fitted bottom sheet and spread it across the bed hoping his responsibility or shame might kick in, but the only movement he made was setting his arms akimbo. Not the message I was hoping for. I looked up and as gently as I could I said, “Jake, I am not the maid, and I did not create the mess. If you’ll recall, one of my goals was to lead you to independence.” His arms unfolded but his feet held firm to the floor. I continued making the bed, and chose my words with care. “Before you can have a staff take care of your unwanted chores, you must earn the privilege and appreciate what it is they do for you.”

Finally his eyes met mine. “You mean, I won’t always have to make my bed?”

I nodded. “Just earn the privilege.”

Jake was unsure his parents would agree and I really wasn’t sure either, knowing how poorly they’d followed my first and only requirement, once a week family dinner. But I must have offered the right words of encouragement because he opened the top sheet and spread it across the bed. I bit the inside of my cheek and swallowed my words watching him make perfect hospital corners. He caught me staring though and smiled, “Boy scout camp,” he explained.

We stepped back to admire the work. Jake looked proud but refused to admit it. With another job well done, I would have loved to cart the box containing the “elsewhere items,” mostly dirty dishes and silverware, to the kitchen, but instead I called on another successful mantra of mine – Always leave while you’re having fun. Jake was happy and I was too. Time to pack up. The box would be there when I returned. 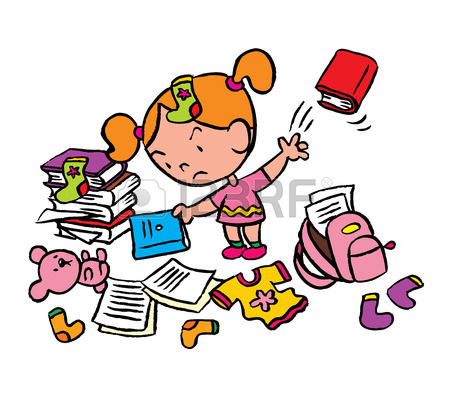 Many students often disrobe as they enter the house at the end of the school day. The backpack falls to the floor as they run to the fridge for snacks and a trail of belongings follows their path as the after school hours progress. The “Where’s my…?”

I know it’s hard to break old habits, and it takes time to build new ones, but no more excuses. Just admit you didn’t do it, and do better next time.

Rarely  do I receive anxious calls from parents of straight A students. But this week I listened to the exasperation of a […]